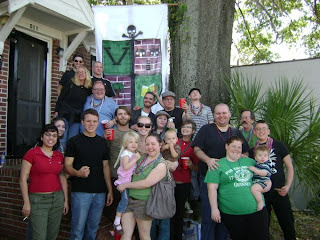 Well, there we are. Some of us, anyway. The parade party is such an in-and-out affair. The biggest difference between this year and, say, 2005 (my first spring in the Fives) is all the babies. Look at all those young'uns. I remember going to big shindigs with my family as a wee one, with the grownups disappearing in small groups and coming back smelling funny, meeting other kids that I still run into (mostly, admittedly, in bars and at shows). So I look at my friends' babies and think, here we go again.

As for the parade itself, we cheered nearly every float, beauty queen, marching band, business, politician, community group, poop-scooping prisoner, and boiled peanut vendor who went past my house. Now, there was pretty much dead silence as the Sons of Confederate Vets went slouching past us, with one or two calls of "out with the old south, in with the new!" and "you're standing in the way of progress!" I know, some folks just love the play the martyr, and I'm as proud a southerner as you'll find, but damn. Give up all that crap and get up here with the rest of us. I promise, it's a lot more fun. But I suspect they're not doing as well these days - it looks like they couldn't afford to bring in that one Black Confederate that hires out to groups like that so they can claim not to be racists.

Days of prep, hours of party. Still well worth it.
Posted by That Hank at 8:54 AM 8 comments:

The FSView (which tries hard to make sure it remains the worst local paper, despite the Democrat's best efforts to take that title) just published the results of their annual Best of Tallahassee survey.

No wonder college kids consider Tally a cultural wasteland. Evidentially, they've never actually been here.
Posted by That Hank at 10:26 AM 4 comments:

Honoring me more than I can say, my sister and her fiance asked me to perform their wedding ceremony next month. Luckily, I think they're really good together, so I was happy to say yes. Like a million other people, I'm a "Reverend" with that church that will ordain anybody, and in Florida that's enough to marry people. But I wanted to make sure this shit's legit, so a few weeks ago I sent off a money order and the downloaded forms needed to become a registered notary.

Now, their wedding is going to be tasteful (from what I understand). But it strikes me that I could do so much more in the four years my appointment as notary lasts.

I keep picturing a tv advertisement, like one for a local car dealership. The camera pans in on me in a black guayabera shirt and dickies, standing among the flowers at Maclay Gardens. I smile brightly and say, in my broadest southern accent,

Getting hitched? Need a no questions asked ceremony? Want to be able to move the party to the maternity ward at a moments' notice? Been turned down by preachers unwilling to make the hike out to your his n' hers deer stands? On a budget but looking for a little class?

Look no further! I am your one stop ball'n'chain shop. No suits? No shoes? No problem! Spent all your dough on camo brides' maids dresses? Worried that the keg will tap out before your friends do? For just a case of beer and a rack of ribs, I will bind you unto eternity.

(Fast voiceover: No actual guarantees made on length of marriage.)

Always dreamed of walking down that aisle to the sweet sounds of Carrie Underwood? Guns n' Roses? Insane Clown Posse? The theme from Rocky? You provide the music, and I promise not to laugh.

The camera pulls back and I'm lit by the setting sun, my shaved red hair a glow around my head, septum ring shining.

(Deep bass voiceover: For when you really, truly have to get married before the baby comes.)
Posted by That Hank at 3:43 PM 8 comments:

In getting ready for the parade party this weekend, I decided to take a stab at bleaching my bathroom ceiling. See, I don't have a window or fan, and a year or two ago my hot water tap ran hard for a week and a half. That resulted in a garden of mold spots looking down on the room.

Normally, I don't even think about the problem. It's just one more part of living at the Fives. But friends have described it as "disturbing", "disgusting", and "scary like in that movie Dark Water, where you expect the little blobs to form into one giant blob and kill you." That's not exactly what I want to show off when half of town intends to be in and out of my place, so I rallied the troops and went into battle.

My weapons were two mops and a couple inches of bleach and hot water in the bottom of the tub. My armor, a torn up shirt wrapped around my head so that I looked something like a spice-less Fremen and a pair of bright yellow household gloves.

Ever try to apply bleach to a 9 foot ceiling with a sponge mop while, at the same time, keeping it from splashing into your eyes or running down your arms? The war was lost before I even attacked. I need a pressure washer and a tall person willing to scrub. Or maybe I could just tie one of those magic eraser sponges to the end of a bamboo pole and go with that.

On the up side, though, the rest of my bathroom is now so clean that you could actually reach behind the toilet with no fear of grabbing something that would make you puke. Now all I have to do to get ready for the parade is clean the rest of my house, make a spray paint banner, get a keg, boil some peanuts, and remember not to party too hard the night before.
Posted by That Hank at 8:10 AM 2 comments:

Lord help it, if there is a better meal than grouper, black eyed peas, greens, and fruit salad, I don't think I even want to know about it. You could conquer the world on a diet like that. Or at least conquer a swamp, which is what happened in Florida. That was a Ma Baxter Easter meal for sure.

"You and them hounds and all the rest o' the stock," she said. "Mighty lovin' on a empty belly and me with a dish in my hand." 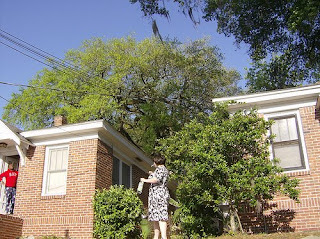 I swear, just last week the trees were bare and the only sign of life was that damn yellow pollen. Now all the oaks are so shiny and green they look like Disney cartoons. Driving around with my window down is like a olfactory buffet - jasmine and wisteria battle to take over whatever sense of smell allergies have left behind. The Weather Channel this morning declared we'd have "abundant sunshine". It's still cool in the shade, and we're a few weeks yet from feeling like your face is covered with a hot, wet towel every time you step out of the a/c.

So tell me, on a day when the dogwoods and azaleas are bursting out of their bark, why the hell am I at work?
Posted by That Hank at 9:04 AM 4 comments:

throw me some beads! 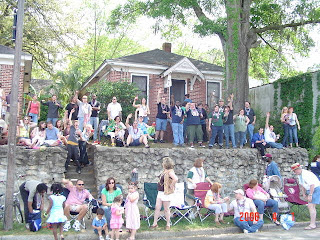 Only a small handful of people actually live along the route of the annual Springtime Tallahassee parade. Most of those people paid $370K+ for one of those condos that went in where they ripped out the Old Library. But two of us, the lucky two, pay not much more than $370 a month in rent and have a little dirt and grass yard for our nearest and dearest to crowd as the parade rolls by.

Springtime Tallahassee is flat out my favorite day to live in the Fives, the small complex where I hang my hat. From the first year I was part of the celebration, 2005, a pattern established itself. Wake up at nine am, shower, dress, and put sunblock on my pale, pale head. Walk out into my "side yard" (aka, the blocked off area that used to be part of the driveway from Monroe to behind my place) to tap the keg I've had on ice all night, assuming that none of the homeless guys or teenage hippies in the neighborhood have found it while I was snoring. Get a first cup of beer (nothing makes beer seem more festive than a reason to drink at completely odd hours). And then stroll out my front door to chase off strangers who think my lawn looks like a great vantage point.

They're right, you know. Best in town. And it's reserved for me and a couple dozen buddies. You should hear the cheer that goes up when the cops come yowling over the hill up Monroe from Thomasville Road. We catch beads thrown by pirates. We flirt with the beauty queens. We encourage the baby twirlers and tumblers. We laugh at friends who were forced by their jobs to dress funny and walk with the floats. We dance to the marching bands and laugh at the Gents and Belles. We get drunk and silly and try not to fall off the edge. One time we got flashed, Mardi Gras style. One year the pirate ship float decided they didn't want to quit parading and continued up and down Monroe for an hour, still playing music and throwing necklaces.

This year, the parade falls on March 29. If you're local and you see us, stop in and introduce yourself. Go ahead and have a morning beer, if that's your taste. Indulge in a deviled egg or some boiled peanuts. In not too many more years, I suspect that only those with a half mil in their pocket will be able to afford to live on the parade route. And you know what? I doubt they even care.
Posted by That Hank at 12:15 PM 6 comments: 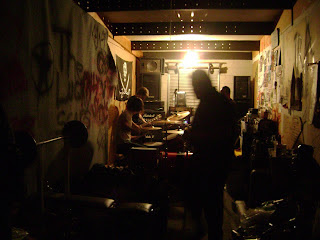 I grew up playing around speaker wires and empty bottles. Cheap spaces in warehouses, basements - even, once, a room rented out in the Planned Parenthood office building - crammed full of musicians and reeking of stale beer and smoke feel as comfortable to me as most folks' kitchens. You know The Warehouse, that excellent local pool hall? Back in the way back, my dad's cover band rented it as practice space. My sister and I used to roller skate there while they worked out Lola and I Got You Babe and Smells Like Teen Spirit.

Here I am now, 31 years old, not myself a musician (although I was once in the single worst band to ever play in Tallahassee), and I still consider "going to practice" a legitimate social option. A night or two a month, I'll be out there in some storage complex on the edge of town, drinking warming cans of beer, breathing in that old familiar smell, listening to my friends play the same 4 bars of their newest song over and over until they get it just right.

I guess I just feel like real music - the shit that means something - is slapped together by hand. There's sweat in there, and drunken tomfoolery, and shocks from a faulty mic, and band drama. And a little tiny space rented dirt cheap so the musicians can still pay bills and raise their families. If I can't hear that in your rock, I've got no use for it.
Posted by That Hank at 2:56 PM 3 comments:

Take a gander at my found image blog, I've had dreams like that. You know you want to see.

Where I Belong, I'm Right

Born at TMH, raised in Lloyd and Tallahassee, been around the states but I keep coming back. I've got a pro-locals outlook, but I can generally get along with most folks one on one. As long as there's beer. And maybe some grub.