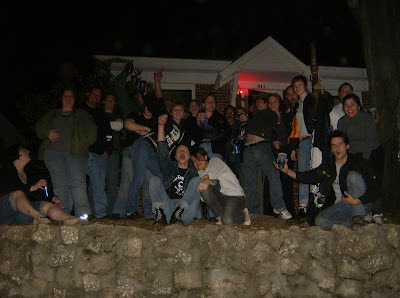 Parade season, that is!

If there's anything in life better than a mug of beer, a hamburger, and a half dozen marching bands, I don't know what it might be.

I wish Tally's parades were bigger, though. I'd love to see all the incredible floats, costumes, stilt-walkers, and bands that march in the Caribbean and FAMU parades be a bigger part of the large community festivals. Why do you suppose they aren't? Racism? Money? Length of the parade? Lack of interest?
Posted by That Hank at 2:43 PM 8 comments:

Now that's how Thanksgiving should go. Rolling Stones songs and bluegrass waltzes on fiddle, mandolin, and guitar. Beer and oysters on ice. Laughing until tears squirt out of your eyes and you have to lean against the door frame to keep your knees from giving out. Family and friends and not really being sure where the line between the two could be drawn. Casseroles named for veggies but mostly made up of cheese and canned cream soup. Eating dinner on tables in the yard while the dogs try to beg without being obvious.

Not much else to say, except that I'm a mighty thankful guy.
Posted by That Hank at 9:52 AM 8 comments:

My friend Deb hates the fair. Oh, man, does she hate it. She works down there on S. Monroe, so to her it's just two weeks of nasty traffic and fuss. I'm in the opposite camp - going to the fair is one of those seasonal events I hate to miss.

For the past two or three years, my neighbor Mark and I have gone down there with a very specific goal in mind: to eat as much carnival food as we can stomach. Do you remember the scene, in the animated Charlotte's Web, when Templeton the rat rolls around the fair after it closes, gorging himself? Our trips are sort of like that, except we pay to get in and don't actually eat out of the garbage cans.

It's like some cold weather tour of gluttony. We started with corn dogs near the ferris wheel and worked our way through the crowds. Sausage on a bun with fried onions, a gyro (my favorite of the night) dripping in tzatziki sauce (and, yes, I had to look up how to spell that), a bowl of cheese grits, a slice of pizza, chicken on a stick, lamb on a stick (no gator on a stick this year, sadly) - if you can serve it off a cart, we ate it.

Temptation set against us from each side - throw a dart and win a giant Spongebob, shoot out the star and win a giant panther, Angel The Beautiful Living Woman With The Body Of A Horrible Snake, the world's largest ox, the world's smallest horse - but we maintained focus and kept right on rolling. Now, after we ran into mom and dad and heard about this year's fancy poultry, we did stop over to check those out. A couple of the featured Chinese birds look like someone took all the brightest feathers from a half dozen different species and stitched them all into one crazyquilt fowl. Did we eat any of those exotic visitors? No, but if you ran a stick through one, dipped it in batter, deep fried it, and sold it off trailer, we'd have been first in line.

We did skip the fried snicker bar, though. Mark had one last year and declared it "just too much".
Posted by That Hank at 1:21 PM 9 comments:

On the list of things I'm pretty sure would kill me, I'd say that high steppin up Tennessee Street from Macomb to Monroe in a full uniform with a foot-tall hat strapped to my head, playing a brass horn with occational stops to dance my ass off has got to be in the top 5. But the FAMU Marching 100 sure did it, and they looked flashy and sounded great doing it. And then a dozen or more other marching bands from the area followed them, spaced in with floats, FAMU alumni, beauty queens, and flag squads.

Hell, the Nims band did it, and those poor kids had a broken drum, a set of cymbols with bits gone from them, and four different makes and colors of sousaphone.

You can forget how racially segregated so many events still are until you wind up as one of the few white folks enjoying the FAMU homecoming parade. I wish the local city parades (spring and winter) attracted more of the folks who got involved with this one, either on the road or alog the edge, cheering.
Posted by That Hank at 12:20 PM 3 comments:

Take a gander at my found image blog, I've had dreams like that. You know you want to see.

Where I Belong, I'm Right

Born at TMH, raised in Lloyd and Tallahassee, been around the states but I keep coming back. I've got a pro-locals outlook, but I can generally get along with most folks one on one. As long as there's beer. And maybe some grub.